How to prune trees.

The right type of simple pruning might save you a lot of heartache and thousands of dollars in years to come.

Formative pruning is a term used for training a plant to become the shape or style or way you want while it is still young and growing. Formative pruning requires you to know how the plant responds to being cut to make the plant grow in a certain way. 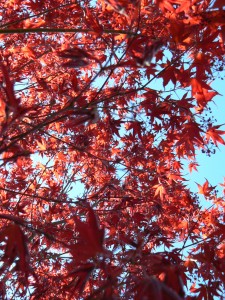 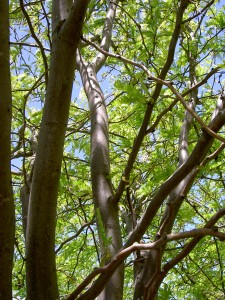 In the case of trees ten minutes of ‘formative pruning’ might save you thousands of dollars in years to come and what is more save a lot of wasted time trying to grow a new one.

Simple things such as discouraging weak branch attachments can make the difference to whether a tree needs to be removed years later or whether it stays to make a beautiful valuable addition to the garden.

Most pruning is about thinking ahead for example clipping to encourage more flowers on Grevilleas or cutting back Salvias to encourage new growth. With trees we need to be thinking not weeks ahead or months ahead but years ahead.

The easiest thing to recognise is the difference between strong and weak branch attachments. Trees are amazing structures; they are not just beautiful but are also works of engineering genius. Weighing in at tens of tons a healthy fully grown tree can effortlessly and safely support this weight and at the same time gracefully move in the wind.

If you are reading this garden blog I’m sure I don’t need to say how useful, beautiful and valuable trees can be but to make them strong it is worth the time to go looking for problems and ‘nip them in the bud’ while the branches are pencil thick or smaller. 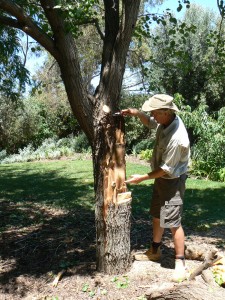 Half of this Manchurian pear specimen has snapped off in the wind and the ten year old tree had to be removed. Major splitting is typical of branch attachments with extremely tight angles such as in the next photograph. In this instance the weak branch attachment has allowed a minor crack to form that has allowed water to penetrate and form a darkened area extending two thirds of the way down the split from my secateurs. The pruning solution here was available eight years previously when the branch was only pencil thickness. If that single branch had been removed the tree would have made others, stronger and better. 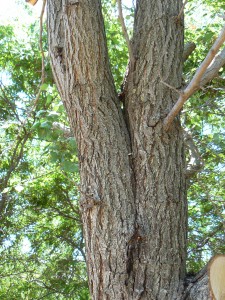 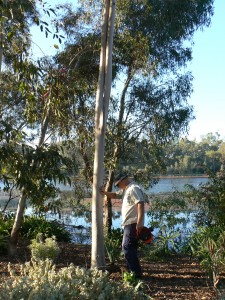 The Lemon Scented Gum (Eucalyptus citriodora) shown above has a very tight branch angle. Lemon scented gums have a strong tendency to grow vertically. At some stage the tip has been damaged and two leaders have developed. If one had been removed when it was pencil thick the tree could have been allowed to grow to a magnificent twenty metres. Instead it had to be taken down. 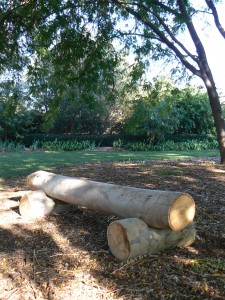 All is not lost! We turned the Lemon Scented Gum into a rustic seat; a place to sit and enjoy the shade of other trees and to consider how a little formative pruning can go a long way!