Home » Gardening for Children » The Yawning Tree – A child’s eye view of the living world.

The Yawning Tree – A child’s eye view of the living world.

If you went down to the yawning tree and turned left you were there, at the beginning of the ‘woods’.  As children we had no other word for it, it didn’t need a word it just was.

It was overgrown and ‘junglely’, a nature’s paradise. What was once a garden with planted trees and shrubs had flourished but not under the supervision of the gardeners, my dad included, who were busy with the manicured acreages of the main gardens of the property,  but under the guidance and uninterrupted labour of nature.

Fought back with a stick in parts the encroaching wilderness cleared to a narrow half-forgotten path that wound its way under the canopy of trees along a small creek, crossing at a rotting moss covered timber bridge where, on the sunny embankment, the rabbits had made a warren. This was a true wilderness where silence from the man-made world was everywhere. It was a place where peacefulness, mystery and solitude mixed with whatever else was happening that day. Mixed with the occasional pain from a flicking twig, a blackberry thorn or stinging nettle we knew where we were and we knew we were alive in the world!

My brother and I were children immersed in the English landscape of a large private estate were my father was head gardener. As children we were surrounded by a world of plants and trees, fallen leaves, squirrels, moles and worms.

We had the whole estate virtually to ourselves. As we explored ever more widely from our little house we navigated by using the landscape, the trees, plants and terrain. We learnt that landmarks were valuable if you wanted to find your way home for tea! 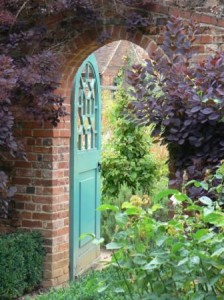 The yawning tree was middle aged and stood at the beginning of the wilderness. At some time in the past a big branch had been torn off leaving a gaping scar. The scar combined with small branch that had died back and left a round ‘eye’. The tree to us looked like a one eyed yawning face.

We knew when we were back at the yawning tree we were nearly home. Home was a converted stables attached to the main house complete with the coach house with a large clock over the huge arched wooden doors that was our garage. If we headed towards the old Tulip Tree we could take a right through the green-blue gate into the walled garden and we were home after another day in the wonderful world of living things.